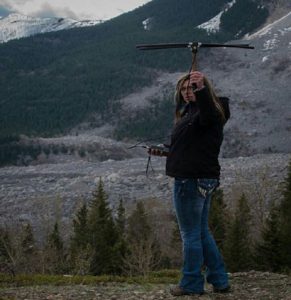 Comprised of dedicated volunteers, all existing members of the local BearSmart perform duties similar to the COPS “Citizens on Patrol” format.

The bears are candidates that would be classified as a Low-level habituation, meaning their continued presence near residential areas could result in a potential problem if their behaviour is not changed. 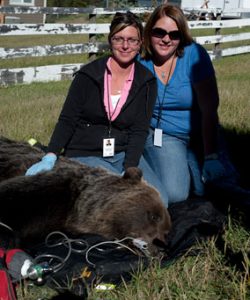 Once the bears have been fitted and released the certified volunteers will take the role of monitoring the movement of the bears within the corridor until hibernation sometime in November.

The volunteer group is the eyes and ears for officers, alerting them of the presence of the radio ear-tagged bears as well as any non-tagged bears within the community.

Response will be made if necessary, conducting aversive conditioning techniques by officers on the bear, changing its behaviour towards those geographic locations and human presence. Results of aversion and monitoring activities will be evaluated annually to determine success or failure. As the Program moved forward the bears have associate the volunteers as part of the aversion process because of their presence with the Officers.

The group has been consistent in promoting the BearSmart message to the community, trying to change and enhance citizen attitudes toward proper garbage handling techniques, removal of Bird feeders, compost management and timely removal of fruit from trees.

This in turn has reduced man hours spent by officers responding to complaints. Bears become aware that they are being watched. 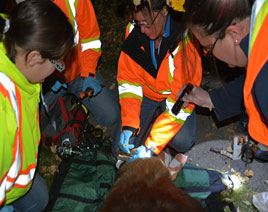 It is also been noted that the citizens of the Crowsnest community have focused more on managing their attractants as the monitoring group becomes a visible presence in the community. Officers have noted a difference in the Citizen’s attitudes towards the management of their attractants because of the high visibility of volunteers, officers and KBDs being proactive prior to a conflict. Problems still arise but to a lesser degree.

The use of social media, such as Facebook, has been paramount in getting the Bearsmart messages out. With over 677 followers the site is viewed consistently and shared throughout. 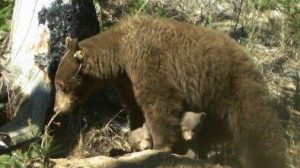 Original captured on Sept 17, 2014. One time garbage issue.
Bear relocated into Livingston range.
Returned back to Hillcrest. First notices around Aug 19, 2015 around east Hillcrest Bridge area. Decision to capture and monitor as Aversion Candidate.
No issues at all during the whole fall of 2015. Denned up in Hillcrest wooded area.
No aversion trials : 2 cubs born Spring 2016
Success

Bear 12 enters the trap & cubs want in with mom! 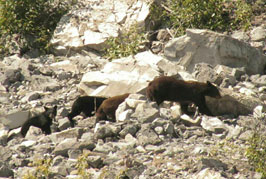 With 3 eight month old cubs
Adult-Female-Brown
160-170 lbs
Fitted-Sept 29, 2015
No prior history
Gradual aversion trials conducted on family group before being fitted with a transmitter.
No issues after transmitter activated.

Each radio tagged bear has an in-depth file on its stationary locations, movement patterns and den locations.

Again, bears started to associate the volunteers slow moving vehicles to aversion, connecting it to the immediate arrival of officer and KBDs.

The presence of the volunteers vehicle with the lite beacon soon became an aversion tool without actually any action taken towards the bear.

Alberta Fish & Wildlife use Karelian Bear Dogs (KBD) as another tool to help with bear management. They assist officers to keep bears wild in their home ranges through adverse conditioning of the bears. The KDB is a powerful breed of dog and also provides safety for Fish & Wildlife officers, landowners, and the public. These dogs are bred for bear aversion, scenting and tracking, and are fearless, bold, aggressive independent thinkers, yet with the ability to be gentle with people.

To learn more about the Karelian Bear Dogs in use with Alberta Fish & Wildlife, click on the link below.

Join Our Newsletter Simply Enter your Information to our Free Information, Advice And Tips !

The annual fundraising raffle is here!

Crowsnest Pass Bearsmart Association is holding a raffle to raise the funds to support our program! Prizes are a bear resistant garbage can, a beautiful canvas print donated by Bound for Mountain Photography, and a basket filled with prizes including b …

Gardening and Landscaping in bear country

It’s gardening and landscaping season in bear country! As much as you may like your garden, the bears like it even more so. To avoid conflict with bears, understand that bears are drawn in to town by food odours. They have seven times the scent sensiti …

Is there a bear in your community? Call the Report a Poacher hotline or your Alberta Fish & Wildlife Area Office